If you slow things down, you notice things you had not seen before – Robert Wilson 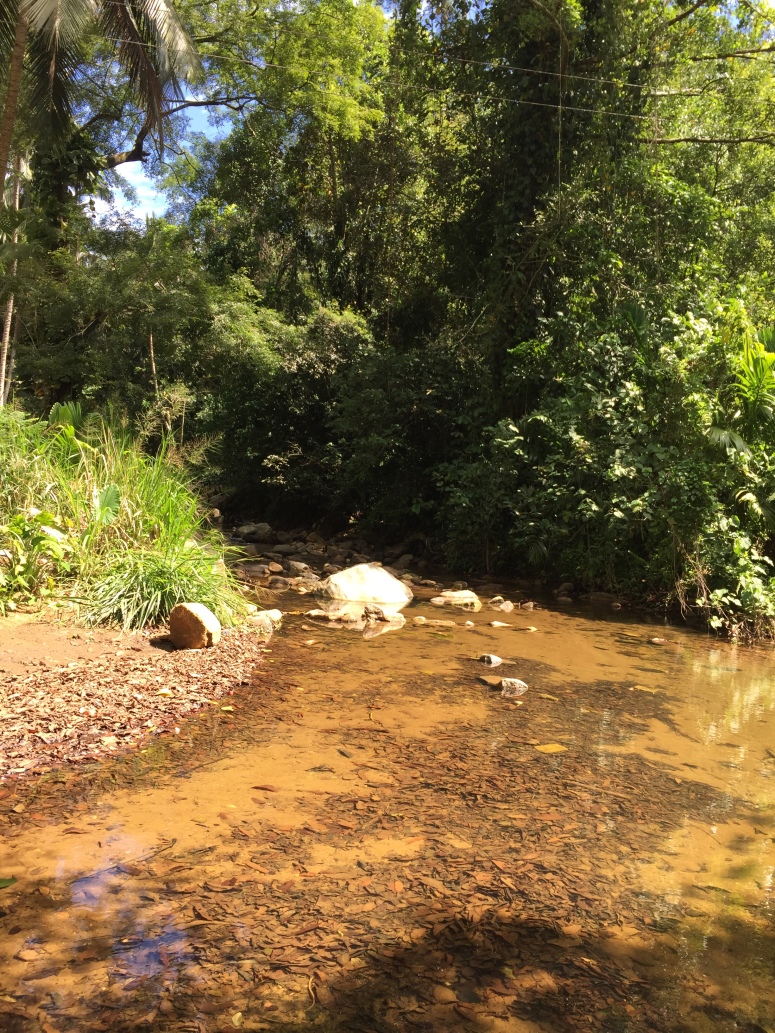 Dusk had kicked in; I was in Deniyaya bus stand where even the street lights were off. I heard a voice…it was Ranjith, Tuk Tuk driver who had come to pick me up. A relief, but was still not sure if I got into the right Tuk Tuk. He stopped at a point and asked me to get off, it was as dark as black. I could only hear water gushing; I flashed my torch & saw few trees. We had to cross the river with my two big bags to enter the forest. After 20 minutes of hike, I finally saw a light. We entered the gate & he introduced me to Katrina, Hi I said & then took a deep breath that I am safe, sound & alive! Sigh! 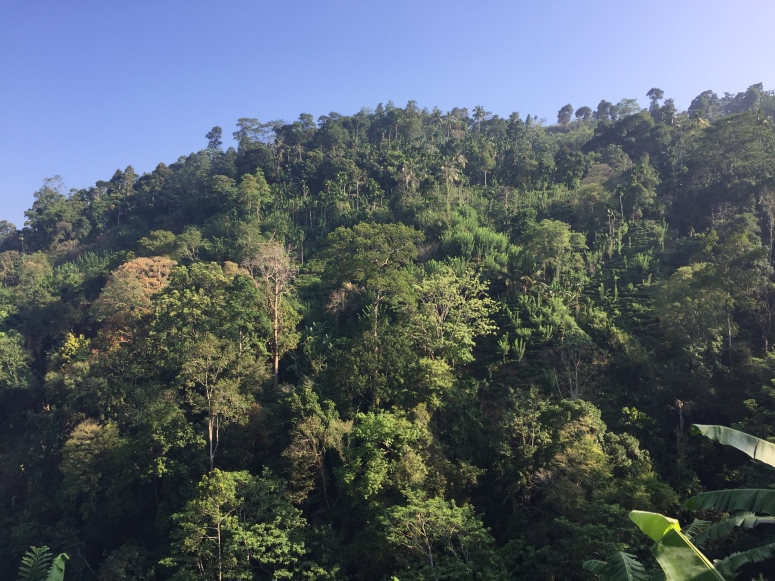 Next morning I woke up to the bright sun rays kicking through the window, glared quietly to a view of dense forest, Sinharaja Forest. I knew I was going to stay here for long, when I saw those trees & heard birds chirping, I was sure that I will. Traveling is an experience, once you stay longer in any place all these experiences grows into you spreading around like branches and keeps you grounded like roots. Those experiences are like nutrients that keep you enriched which moulds to be a better person. 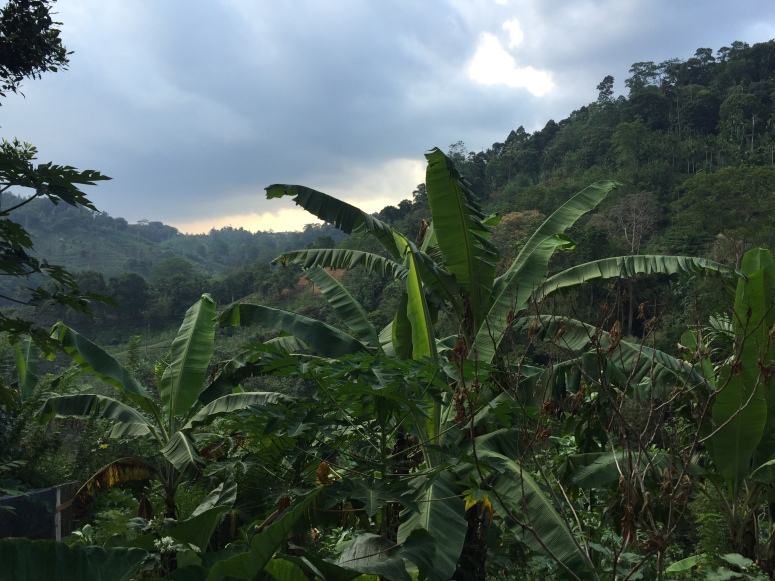 Sam & Karina who quit their jobs & came here few years ago to setup their dream home, they also witnessed deforestation at the same time. They have planted around 800 + tress growing their own vegetables & fruits practicing sustainable living, using only solar power: they call it as Natural Mystic Sanctuary. It is heart wrenching to hear the trees that have been cut & was replaced by tea plantations. As most of the forest, Sinharaja Forest is also under threat; they are doing their bit to contribute to the nature. 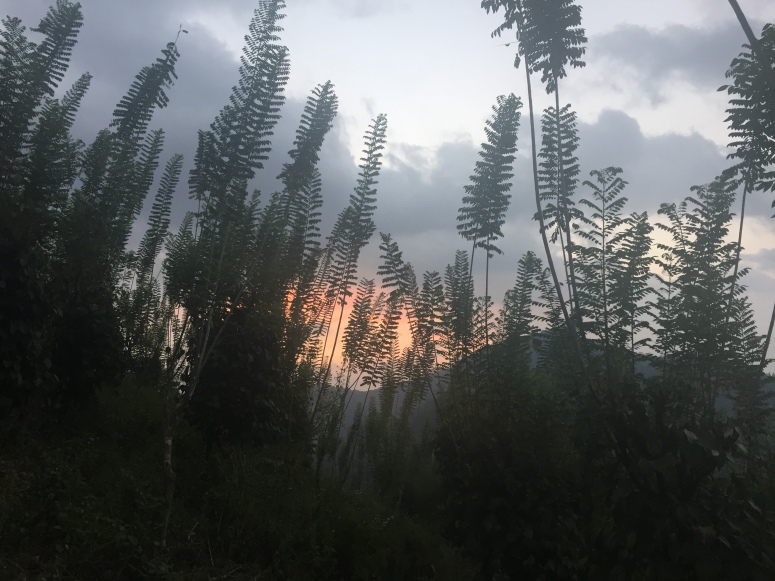 One of the late evenings, Katrina took us for a hike in the forest which is now slowly converting to tea plantations; we watched the sunset through the shimmering leaves & headed back. This is what happens when the need is replaced with greed 😦 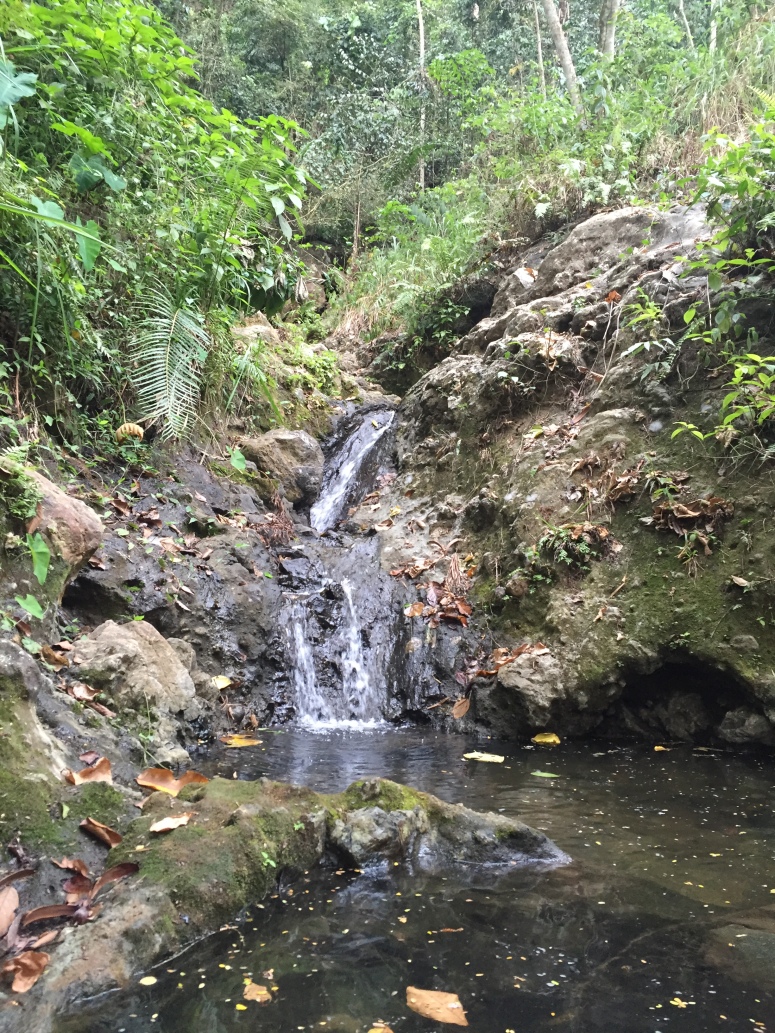 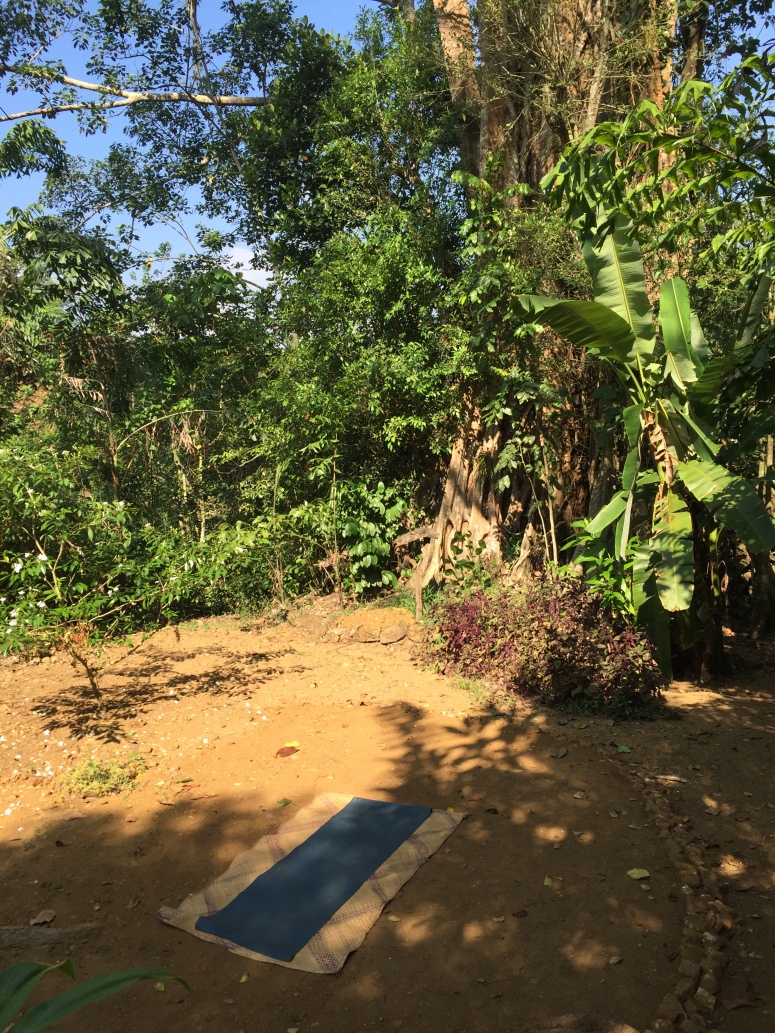 I have always found coolest places to do yoga and this was one of the best where a place was setup under an old oak tree where apparently a big cobra lives in, the thought of it was even more fun to practice yoga 😉 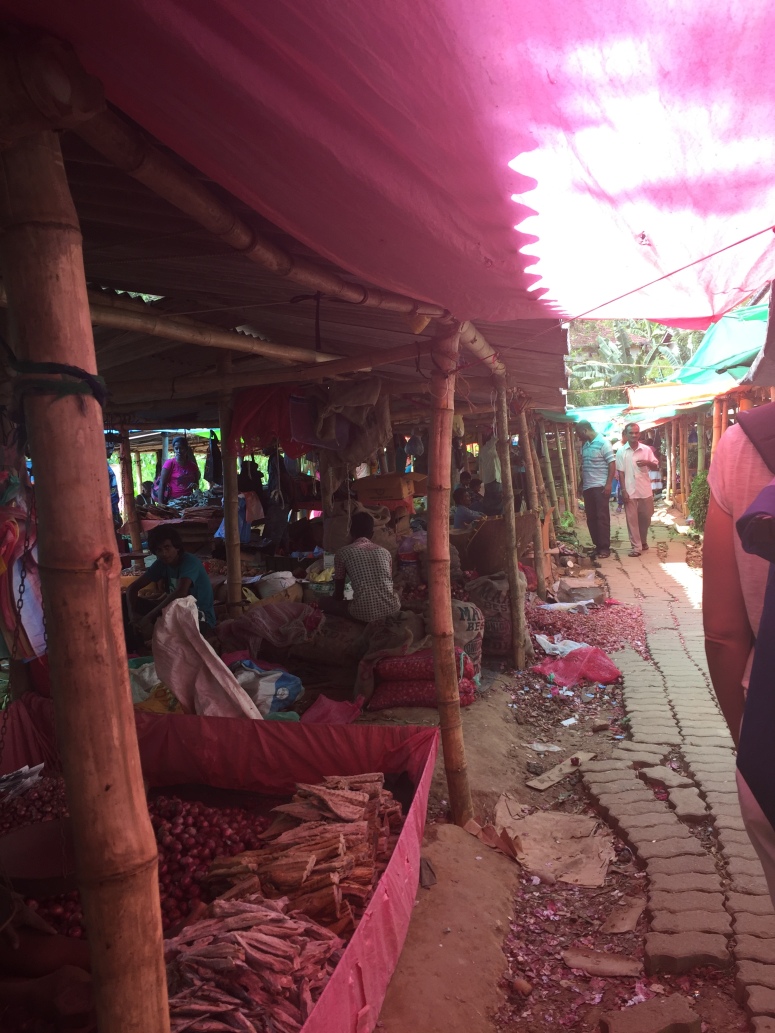 As curious as always, I had to see the local market where farmers sell their crops, and we all headed to shop. This market was covered by netted clothes as roof which seemed like a colorful path when the sun rays were passing through the net. 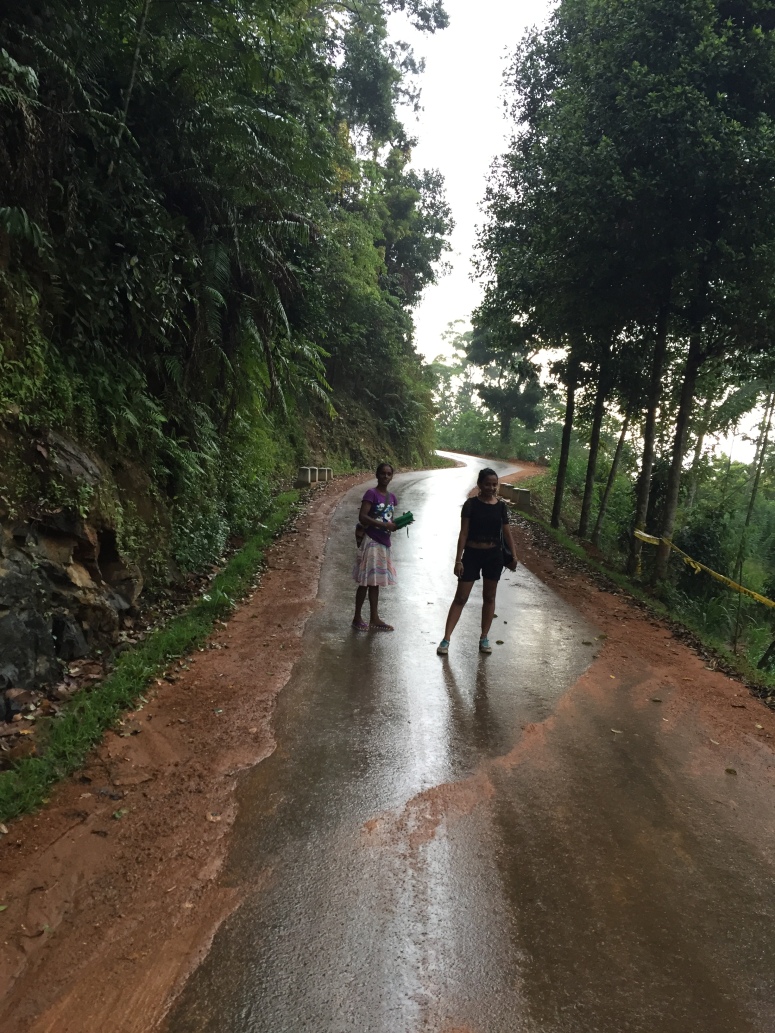 Renuka from a nearby village comes here to cook, one day she came to me with a plate of Vade and she said India. She meant this is from India; I giggled, nodding yes and she says she watches all cookery shows from India and learns lot of recipes. Next day, a mid aged man says Vanakkam (greeting a person in Tamil), he said he is Renuka’s uncle. She had told him that I am from India; he invited us home sharing his stories that he was brought up here; his older brother (Renuka’s father) speaks better Tamil than him. He also mentioned that many years ago, most of the property in Deniyaya was owned by Chettiyar’s: one of the renowned Tamil families. It rained all day and we couldn’t go to their house, next day Renuka seemed upset that they were all waiting for us with pan cakes, tea and tender coconut 😦 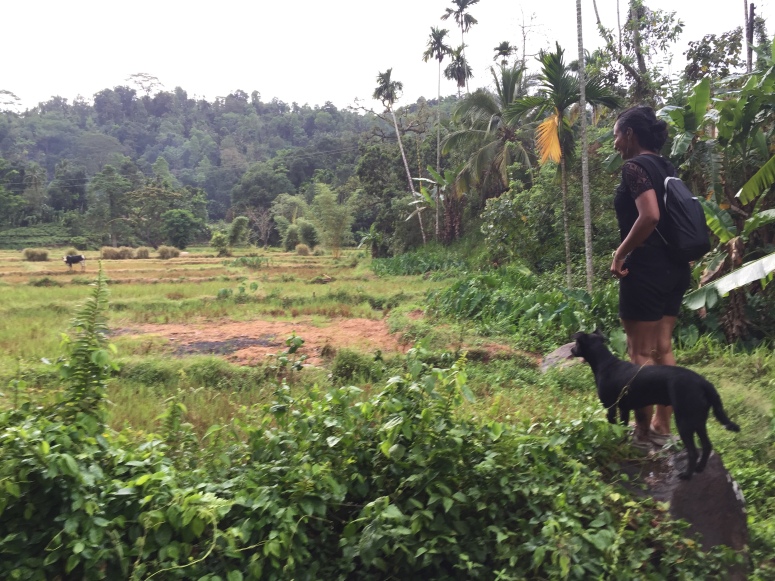 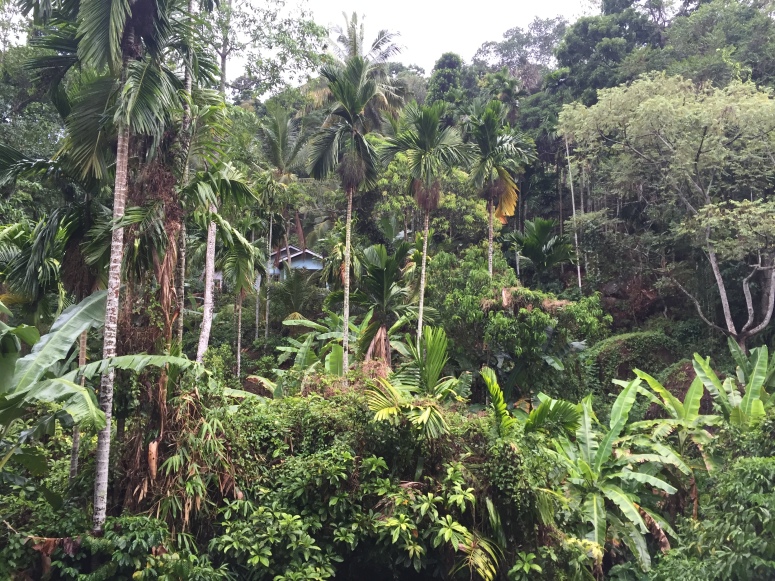 We promised to go with her the same day, Jabba also accompanied us. It was raining all through our walk, locals taking a dip in the water, washing clothes, glittering paddy fields, tall palm trees, cows grazing, tired trees with scorching heat looked all cheered up soaking in the rain! 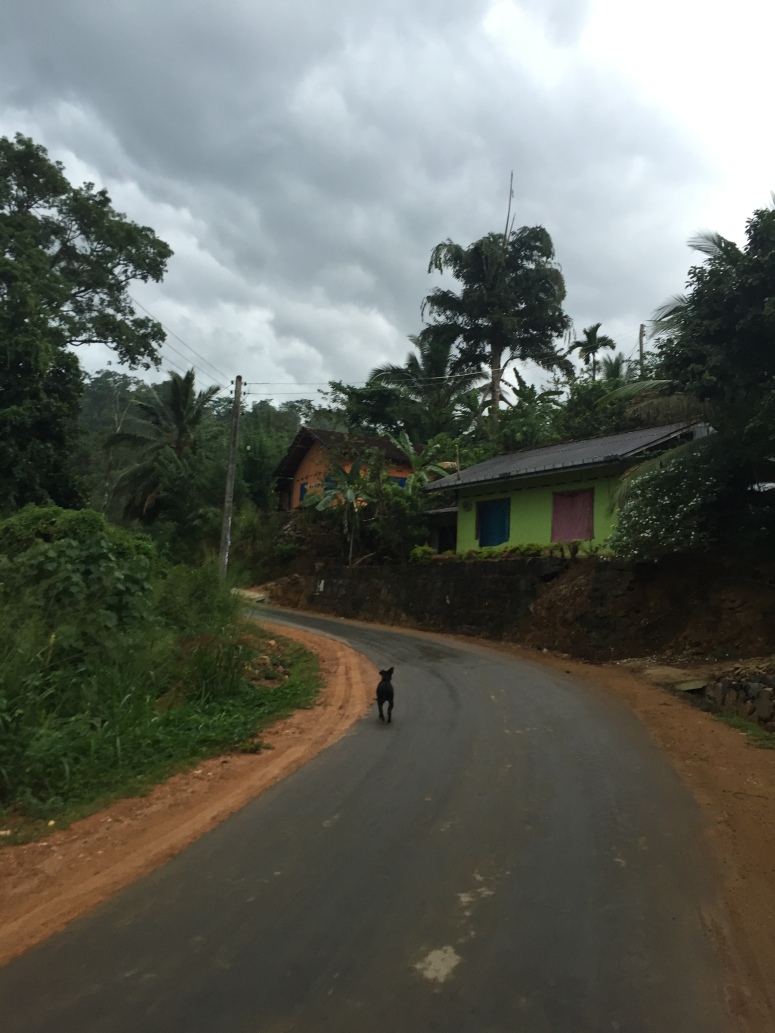 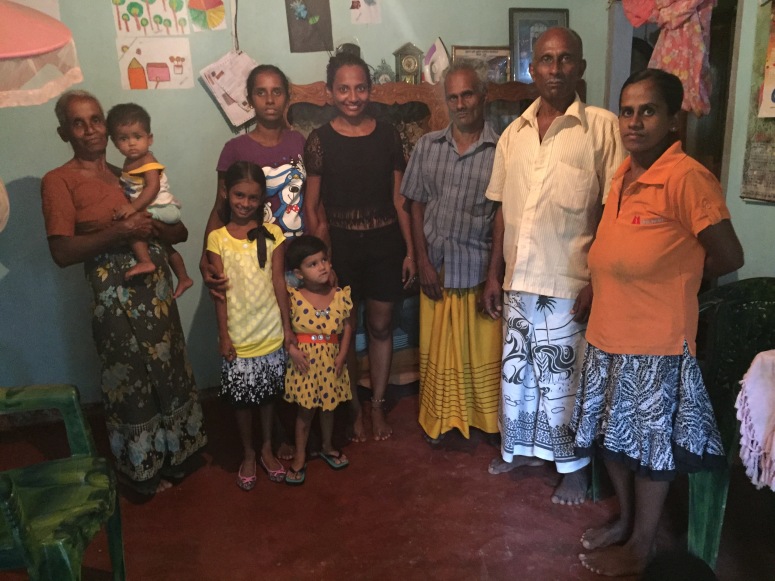 She lives in a nearby village called Batandura, houses here are painted with bright colors which looks like a painting by itself. We were served with super delicious tea & I was conversing with her father in Tamil. He said his father moved to Sri Lanka many years ago and they later got adapted to Sinhalese culture. Renuka’s husband works in a tea factory which was shut recently as they did not have work due to less rain, Renuka works as a cook to manage the family. Her kids got dressed up in their new clothes & shoes that were purchased for their New Year and we all stood for a group photo! Say cheese! 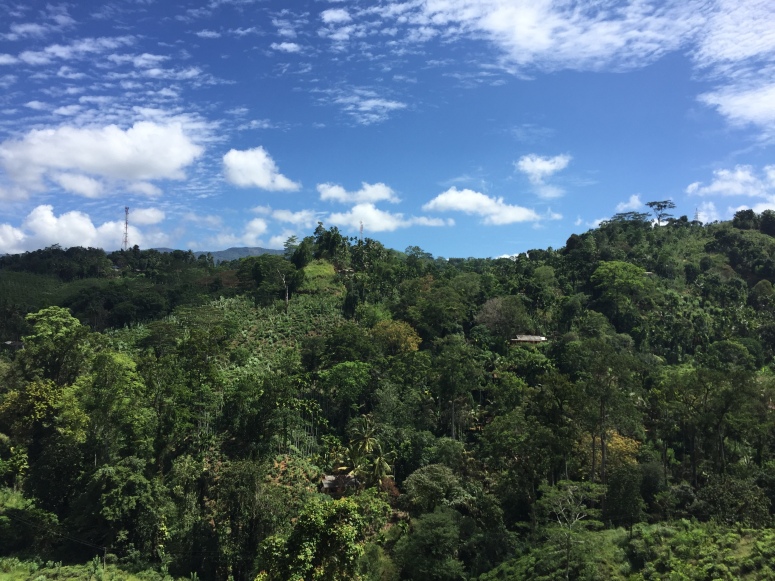 Why do we travel? To meet such wonderful people and for such experiences that keeps you enriched & also moulds to be a better person.